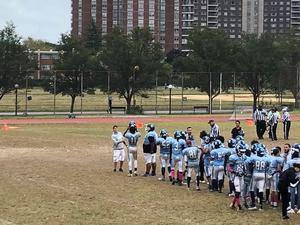 The Randolph Cougars moved to 5-0 on the season this weekend after beating August Martin 16-0 at Truman High School on Sunday.

The Cougars who started the season ranked 56 of 56 by the PSAL have continued to prove everyone wrong.

Senior linebacker Anthony Abreu had 9 tackles to help the cougars to their 4th defensive shutout of the season.

Come support the team next week as they take on Automotive High School @ Truman HS, Saturday, October 12th at 2:00 pm