The A. Philip Randolph Campus High School (APRCHS) is a public screened secondary school. Students are admitted through a screened process by which the most qualified applicants are offered a seat in one of three competitive academic academies: Humanities, Medicine, and Engineering. APRCHS is located in Harlem, on the City College of New York (CCNY) campus
APRCHS occupies a building designed in the Collegiate Gothic style by William H. Gompert, Architect & Superintendent of School Buildings for the New York City Board of Education. Constructed from 1924 to 1926, the building opened as the first built for the New York Training School for Teachers, established in 1898 to provide elementary school teachers for the Board of Education. The Training School became the New York Teachers Training College in 1931, but a surplus of teachers during the Depression led to the abolishment of the school in 1933. 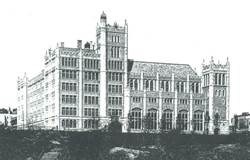 In 1936, Mayor Fiorello H. LaGuardia established the High School of Music & Art in the vacant facility, an event he described as “the most hopeful accomplishment” of his administration. The school was made up of three departments: Art, Instrumental Music, and Vocal Music. In 1984, Music & Art and its sister school, the High School of Performing Arts, were merged into a new school, the Fiorello H. LaGuardia High School of Music & Art and Performing Arts at a new building in the Lincoln Center area of Manhattan. In 1997, the building was designated by the New York City Landmarks Preservation Commission.

A. Philip Randolph Campus High School was established in 1979 as an educational collaboration between the Board of Education and CCNY. APRCHS was originally located in Goethals Hall which is currently a CCNY lecture building on 140th street and Amsterdam Avenue. APRCHS was located in Goethals Hall from 1979 – 1983. APRCHS moved to its current location in September 1984 when The High School for Music and Art was closed and conflated with the High School of Performing Arts to become LaGuardia High School.

APRCHS is open to all New York City residents, and more than 90% of its graduates attend college. Its daily attendance rate is 90 percent or better throughout the year. Students may take advanced placement (AP) courses as well as college courses at CCNY, BMCC, and Touro College. Starting in 2015 students have also been able to elect to enroll in APRCHS’ Dual Language Program which allows them to become fully bi-literate in English and Spanish while still pursuing the other Academy Electives in Medicine, Engineering and the Humanities.